UNISON members have voted overwhelmingly to reject the 0% pay offer in higher education, which effectively amounts to a pay cut in real terms.

The public service union UNISON’s higher education group executive (SGE) met last week to consider the result of a member consultation on the pay freeze that has been imposed on staff in the higher education sector.

The consultation came after university employers offered staff an “insulting” pay freeze, following which the union said: “It’s an insulting figure at the best of times, let alone when staff have spent the year bending over backwards to keep services running safely and efficiently.

“From keeping campuses cleaner than ever before, to making high quality remote learning a reality; from supporting vulnerable students, to planning programmes and finances when everything’s up in the air – university staff simply could not have given more to their jobs.”

The union’s consultation closed on Monday 30 November and it has now been revealed that members have voted overwhelmingly to reject the pay freeze. Subsequently, the SGE has decided that a dispute should be lodged with the employers and that UNISON’s ongoing ‘Thanks For Nothing’ campaign should be escalated to include planning for industrial action. 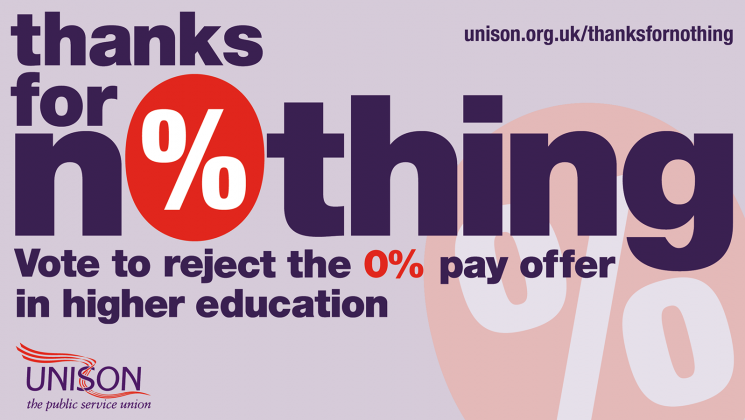 UNISON senior national officer Ruth Levin said: “Our members are sending a clear message that they are not prepared to put up with a pay freeze, which, with inflation taken in account, is actually a pay cut.

“Higher education staff have worked harder than ever before under such difficult circumstances over the last nine months to keep universities running and to support students.

“To be told that they are not getting any pay rise is an insult.

“We are urging the higher education employers to reconsider their position and get back around the table and make a meaningful offer.”

Although the pay increase proposal is in line